Where It Starts: Vans announces new partnership with Skateistan

On Go Skateboarding Day, Vans announced an exciting new partnership with Skateistan! Vans launched a campaign called 'Where It Starts' which reminds fans that skateboarding would not be where it is today without the strength of community. The campaign zeroes in on what makes skateboarding so special—the streets, skateparks, backyard pools and communities that built skateboarding from the ground up. Fans will hear from skateboarding’s most talented stars including skateboarding legend, Vans athlete, and Skateistan board member, Tony Hawk, Vans skaters Lizzie Armanto and Pedro Barros, and Skateistan ambassador Yann Horowitz.

And that's not all! Vans will also be supporting Skateistan's programs and students. Now until August 30th, Vans will donate $10 from every pair of Custom Skate Classics purchased from Vans on Vans.com/customs  – up to US$200k – to Tides Foundation in support of Skateistan. Consumers will be able to create their own unique pair of Vans Skate Classics and in doing so, can give back to Skateistan in honor of Go Skateboarding Day.

Vans fans can visit Vans.com/skateistan to watch the new video spots of the “Where It Starts” campaign beginning July 6. You can now create your own Custom Skate Classics with select recipes from Vans ambassadors and athletes to donate directly to Skateistan’s programming. Share your custom designs and where skateboarding started for you by tagging @vansskate on social media today!

We are delighted to be partnering with Vans and we're excited to see where this can take our students and Skate Schools. Thanks to Vans for supporting our mission to empower children around the world! 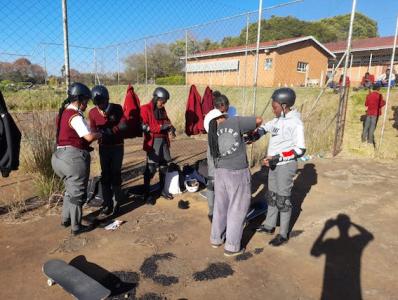 Every day is International Women’s Day at Skateistan
Around half our students are girls and we strive every day to keep this at 50% or even higher.